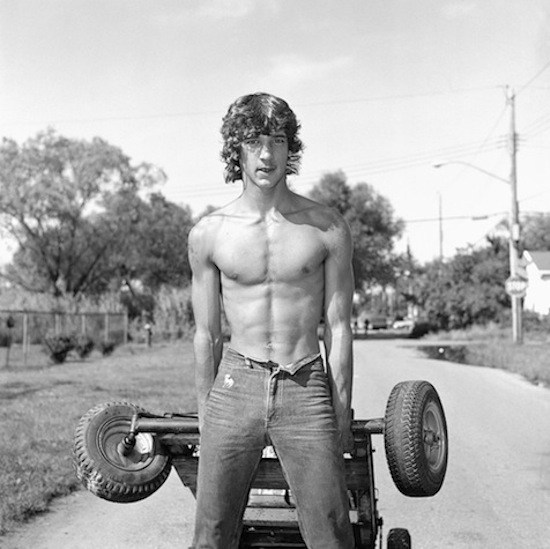 Christine Osinski’s work has been included in recent exhibitions at The Portland Art Museum, Oregon; The Irish Museum of Modern Art, Dublin; La Casa Encendida, Madrid; The New York Public Library; The Museum of the City of New York; Wave Hill, Bronx, NY; Alice Austen House Museum and Blue Sky Gallery. In 2005 Osinski became a Guggenheim Fellow. Her work has also received support from The New York State Council on the Arts, The Graham Foundation, Connecticut Council on the Arts and Lightwork among other foundations. Most recently, Osinski received the inaugural Fine Art Still Photography grant from the Pollock-Krasner Foundation. This is the first time that the foundation has awarded grants to photographers, and Osinski used the grant to complete a book featuring her Staten Island photographs.

Her photographs can be found in the collections of The Museum of Modern Art, NYC; The Museum of Fine Arts, Houston, Portland Art Museum, Oregon; La Bibliotheque Nationale, Paris; The Fogg Art Museum at Harvard University, The Museum of the City of New York, The New York Public Library and in numerous other museums. Photographs and reviews of her work have appeared in The New York Times, The New Yorker, The Boston Globe, The Wall Street Journal, Photograph Magazine, Time Magazine, Art On Paper, New York Magazine, Art New England as well as in many books and periodicals. She has created two self-published monographs of her work, Sunburn and Big Shoulders, both published in 2015. Her most recent book, Summer Days Staten Island, will be released by Damiani and features an essay by Paul Moakley, Time Magazine’s deputy director of photography.

Christine Osinski received a BFA degree from The School of the Art Institute of Chicago and an MFA from Yale University.  She currently teaches at The Cooper Union For The Advancement of Science and Art in New York City and  lives in the New York Metropolitan Area.

These black-and-white photographs, shot on Staten Island, where Osinski has lived since the eighties, when these pictures were made, are so casual that it takes a minute for their rigor and wit to register. Diane Arbus comes to mind (many of Osinski’s pictures look like the charming work Arbus did for the children’s-fashion section of the Times), as do Stephen Shore and Judith Joy Ross. The mood is relaxed, the clothes summery; boys have their shirts off, girls lounge against cars. For context, Osinski includes a few houses and gives us a sense of the dead suburban space that her people always manage to animate.

Is it time or place that makes Christine Osinski’s pictures of 1980s Staten Island seem so distant?

It could be the hair. The “Two Girls With Matching Outfits” (1983-84) have Farrah Fawcett hairdos; although their hair is dark, there is a lot of it. Their matching rompers look more J.C. Penney than H&M, and their postures, particularly the one on the left, date them.

Be that as it may, Ms. Osinski filled her frame with them, and presents them affectionately. It is not without significance that the building behind them has sheltered space for automobiles. Vehicles are present in 18 of the 23 black-and-white pictures up at Wolf, and in several cases are the point of the image. “Ziebart Auto Repair” (1983-84) is nestled under the Bayonne Bridge and separated from Gem Transmissions and Arties Paint & Auto Body by a chain-link fence. The “Three Women With Bat” (1983-84) are posed at the back of a Cadillac, one of them sitting on the trunk with a can of Budweiser beside her. One of the “Two Boys With Automobile” (1983-84) leans possessively against the side of a behemoth Oldsmobile while the other peers at the camera from the driver’s seat.

There is precious little art photography from Staten Island, so Ms. Osinski’s work is especially welcome. Her exploration of the tract housing with its faux Tara-like porticos, and her sensitive portraits from 30 years ago of people living between the Lower Bay and New Jersey, remain vital.”

Collector Daily, October 2013
Christine Osinski’s black and white photographs from mid 1980s Staten Island are full of small, unassuming memories. Grounded in fleeting glimpses of modest New York neighborhood life, they look back to a time when teenagers lingered on sidewalks and houses bore the trappings of unpretentious aspiration.

More than half of the images on view in this consistently evocative show capture the telling, almost invisible gestures of the local kids, from pudgy young boys in pulled up shorts to more worldly teenage girls warily drinking beers sitting on the back of a parked cadillac. Awkward pre-teens look away timidly or stand self consciously in their knee high tube socks (a look I remember well from my own early 80s style), while boys just a few years older are flexing their muscles and showing off their go-karts and girls with feathered hair and name tag necklaces are posing in matching sashes and short shorts. Osinski’s summertime portraits have an effortless ease to them, a casual genuine warmth for all the uncool stages of growing up.

Other images in the show document the quietly quirky houses in the neighborhood, with their front portico columns and neatly trimmed spiral evergreens. Osinski has a subtly tuned eye for unexpected details and ironies: roof fixing ladders criss-crossed in angled patterns, the perfectly edged strips of front lawn grass, the treeless dirt expanse flanking the new houses in the aptly named Forest View Estates, and the ornate putti sitting atop dull brick pillars. Images of grimy kids playing in front of houses with overgrown driveways, plastic pools, hanging motors being repaired, and crashed cars never tread into criticality, but linger in easygoing, observant openness.

In the end, these prints are full of the tiny meaningful details that remind us of a specific time and place. But the shy look or the trying to be cool swagger of the everyday kids in Osinski’s images is more than simply nostalgic. The craftsmanship in these photographs is consistently high, and the nuance in the modern prints does justice to the richness in the portraits. We’ve been transported to a Staten Island of the past, but the small human truths found in these photographs are universal.