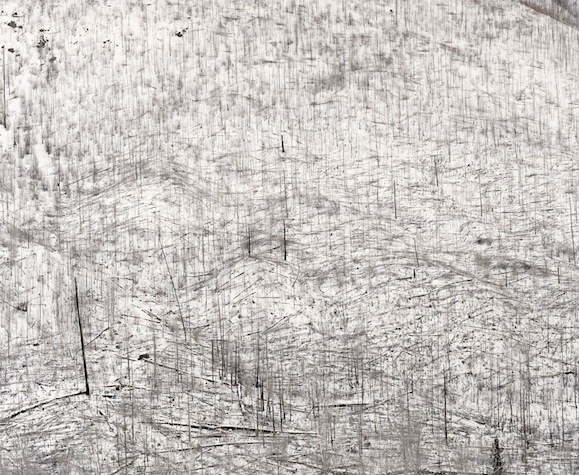 David Nadel was born in Massachusetts, and holds a BFA from Purchase College in Visual Arts. His work has been exhibited at the Soho Photo Gallery, PIP Pingyap Int’l Photography Festival, and +Kris Graves Projects. His series Burns, as well as Burns II, have received press in The New Yorker, Collector Daily, and the Wall Street Journal. He currently lives and photographs in Montana.

Swept by wildfires years ago, the northwestern Montana forests Nadel photographs are little more than blackened trunks, straight as telephone poles and stark naked against the snow. Nadel works with a large-format view camera, not unlike the equipment the pioneering Western landscape photographers used, so his pictures are astonishingly detailed but often flattened out. The snow turns the landscapes virtually black and white, like drypoint etchings; what little color remains—bits of green new growth, red branches against a charred trunk—comes as a pleasant shock. From a distance, the topography looks hairy and anatomical, full of fleshy folds and scars, a body still in shock.

David Nadel’s second installment of wildfire charred, snow covered Montana landscapes introduces a series of small refinements to his already successful visual formula. Like the works from his previous show (in 2011), his newest images begin with arduous hikes to remote areas of unpeopled wilderness and end with miles of forested space compressed into flattened planes of nearly abstract lines. What’s different this time is a subtle sense of increased sharpness, where the soft haziness of the early works has been traded in for a slightly tighter and crisper aesthetic.

Nadel’s trees run the gamut from thin and spindly to dense and furry, depending on his distance from them and their natural clustering. Long views turn the trees into hairy bands and layers of medium grey that settle into the mounded hollows and angled valleys of the mountainous terrain. Closer in compositions are made of striking, all-over verticals, the trees striped into high contrast minimalist lines or feathered like bottle brushes. Against the blank whiteness of the snow, the endless repetition of the textural trees becomes meditative, the enveloping monochrome environment broken only by the isolated splashes of color of a lone, defiant regrown evergreen or the thin red stems of dormant undergrowth.

The best of Nadel’s new landscapes have an almost mathematical rigor and precision, where the trees are dead-on straight and the lines run up like zips, creating a humming screen of verticals. It’s these back and forth battles between organic and abstract that are fresh and exciting here, giving the works an added layer of formal interest beyond their obvious natural grandeur.

Nadel’s photographs of snow-covered forests in mountainous northwestern Montana that have been burned in wildfires look like ink drawings or etchings. From a distance, perspective collapses, and the leafless trees are nothing more than thousands of thin lines – tough whiskers on the landscape. Although these are color photographs, the effect is crisp, graphic black-and-white; even at closer range, the trees appear nearly colorless. Working with a traditional four-by-five view camera, Nadel turns out images with a brilliant clarity that’s most remarkable in the smaller prints here, where the forest seems poised between devastation and rebirth.

David Nadel’s photographs of snow bound Montana forests reduce the landscape to a set of minimalist gestures, where charred tree trunks become dark vertical lines against the vast expanse of white. His pictures are like abstract exercises in linear geometry, executed with the delicacy of a dry point etching.

My first reaction when I entered the gallery was that these pictures were the direct descendants of Frank Gohlke’s Mount St. Helens images from the early 1980s, and they certainly share a common aesthetic of fallen trees and dense textural surfaces. What’s different here is that Nadel’s pictures are even flatter; significant depths of distance have been aligned into one skyless plane, removing the sense of scale and abstracting the mountains and valleys into white backdrops. As such, there is also some intellectual kinship to Frederick Sommer’s desert works, or some of Taiji Matsue’s elevated landscapes. Depending on Nadel’s position, the blackened trunks can look like up-close shoots of bamboo, or can be transformed into a calligraphic mix of spindly lines when seen from afar. The contrasts of thick and thin become the elements of his monochrome compositions.
At one level, there is something simple and decorative about this work; the effects of powerful burning have been softened, turned into muted line drawings. What I like better is to consider the concept of using the land as a basis for radical abstraction, and to see how different photographers have stripped away context in landscape to highlight its nuances of pattern and form.

David Nadel’s photographs are all alike, but different: Think of riffs on a theme in jazz. He spent much of the past four years lugging his large-format camera through the mountains of northwest Montana, from the Swan to the Apgar and Whitefish ranges, to photograph the delicate beauty of burned forests. There are no signs of man in any of the images, and little color in these color photographs. Mostly there are the black, calligraphic strokes of naked tree trunks seen against a background of snow, in patterns determined by the contours of the immense landscapes.

There are more than a dozen species of trees in Mr. Nadel’s pictures, kinds of fir, pine, birch and larch; their trunks are as straight as a ship’s mast. The lodgepole pines in “Burn #2” are only four inches in diameter and stand 65 feet tall, the thin upright trees seen crossed by those lying on the ground. In “Burn #75” a dense overall pattern of vertical lines is complemented by a thicker band of trees with filigree-like branches running across the bottom. “Burn #12” puts us close enough to the trees to see patches of yellow wood visible amid the burnt bark—and, toward the bottom of the picture, small shoots coming up through the snow with barely discernible green branches, a sign of rejuvenation.